Why can’t I focus? 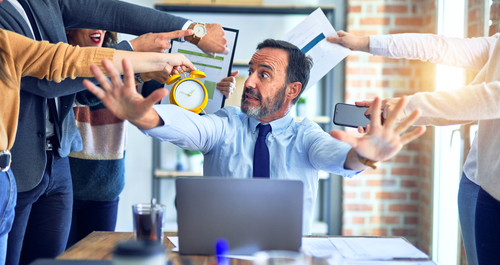 Are you always running to do a million things at once and never really getting anything accomplished to your full satisfaction? Do you often feel overwhelmed by your daily responsibilities and dream of just dropping everything to escape?
Quite a few of my clients come to me for coaching while feeling this way and I’m willing to bet that this is a feeling shared by a lot of you busy professionals.

Why have focus?
I feel that multitasking is overrated. Increasingly, science is proving me right. A study conducted by three professors at the University of Michigan(1) proved that shifting mental gears costs time, especially when shifting to less familiar tasks.
Yet another research conducted by the UCLA(2) showed that learning a new task while multitasking adversely affected the brain’s ability to retain the newly learned information.
Other numerous studies show the dangers of multitasking while driving and the body of evidence against multitasking is growing.
I have my own clients as proof: In my business coaching practice, one of my first tasks with the business owner is to get the entrepreneur to pick a niche service or product to market, as well as a niche target market. In other words, I ask them to pick a direction to focus on. This is more difficult than it sounds but those clients who have successfully done this have seen their businesses explode in size—even in a challenging economy.
Clearly having a focus, ie. a singular direction, is a formula for success. So why can’t people focus? Here are a few reasons that I’ve witnessed with my own clients:

They don’t know any better
We live in a society where more is considered to be better. We are thrown more tasks, information and stimuli with every passing day and are made to think that we are better off for it. As a result, most people think that in life and in business, it’s better to be doing more. They are unaware of the research and business theories that suggest otherwise.

They are afraid to change
Once I educate my clients about the benefits of focusing, they are faced with a difficult decision: to continue to do what they’ve always done (to have multiple focuses) or to just pick the most strategic option and focus on just one goal for the time being.
Sadly, some are never able to change—even though their businesses are bankrupt or they’re miserable in their personal lives. This is a very difficult thing for both coach and coachee as I often liken the situation to what an alcoholic must face. Knowing that each drink is killing her but still unable to stop drinking.
For example, a client who was losing money with each sale due to improper price setting was unable to dig herself out of the situation she had created with her business because she could not focus on setting business goals that would make her profitable. She simply refused to take time out of doing the actual work to focus on managing the business to make her profitable—even at the expense of thousands of dollars of loss each month.
In another case, a client had difficulty picking a niche business specialty because he didn’t think that he had enough expertise to claim any area as a niche. Unfortunately he also refused to take the steps necessary to create the time to become an expert in any field and after several months was still unable to pick a niche. This resulted in his business results continuing to slide.
On the flip side, those clients who are successful in choosing a single focus and embracing a different way of doing things find that their lives are simplified and have more meaning. They are now capable of saying ‘no thanks’ to clients, tasks or opportunities that come their way but that don’t fit their immediate focus. They now have more free time to actually create more ideas for their focus goal. They are more energized and confident.

How do you get focused?
The first step to having a focused goal is to think long term. How do you want your life to look like 10 years from now? What type of people do you want to be surrounded by, what kind of job tasks to you want to be performing? What income do you want to have?
Are the things that you’re doing right now likely to get you there?
The next step is to think of what actions would actually get you there.
For example, one of my clients who hired me to help him launch a new business realized that it was entirely the wrong kind of business to be in if he wanted to retire within 10 years, which was his ultimate life goal.
Another client had given up her job, her financial security and substantial time with her family to launch a brand new career. After years of sacrifice and a very hard life that nearly brought her to the brink of divorce and bankruptcy, she realized that this new career could never satisfy her short term financial needs and went back to her old job.
Had she thought about the kind of life she wanted in 10 or even 5 years, would she have seen that the new career wouldn’t be the way to go?
When you start thinking from the end, the path to focus on is much clearer and life is magically simplified for you.
I hope you will take a look at your own harried life and start thinking from the end and focusing on the real important things that will make all your dreams come true sooner rather than later.